Rafael Nadal is a creature of discipline, dedication, and hard work.

It is part and parcel of his success. Whether it is the sprint to the baseline after the coin toss, or how particular he is with the placement of his water bottles in front of his courtside bench, or how he shakes his hair at the end of a match and before shaking hands, it must be right. Some of those rituals are so well recognized that if he didn’t do them, fans might wonder if it really is Nadal on court.

One of those recognized routines is to walk on court for a match with his Babolat racquet in his hand. He will wave it to the crowd, accepting their welcome applause, but it is also the racquet he will use to start the match.

‘From the moment I walk out of the locker room, I start hitting some air strokes,’ Nadal explains, ‘and I like to start feeling the sensation of being already in the match. I really feel the match has started, and as I say it is a matter of sensations, feeling.’

There are even behind-the-scenes routines to do with his racquet, although not many. When he gets his ankles taped before a match, he uses that specific time to put grips on the racquets he will use for the up-coming clash.

Nadal’s photographic memory of tennis players is quite outstanding. He can remember the first racquet he played with. It was given to him by his Uncle Toni, his original and long-time coach, and it is proudly displayed at the museum of the Rafa Nadal Academy to be seen by everyone there. The Rafa Nadal Academy is a sprawling facility in Mallorca which the man himself is very active in overseeing.

The racquet that has evolved with him during his time with Babolat is the Pure Aero, which is a striking fluorescent yellow. He says, ‘I normally play with racquets that I have already been practicing with. I carry six racquets in my bag and have them well numbered in order, so I know which one I am using at all times. I normally start playing with the one I warm up with which has been strung also just before the match.

‘I don’t have any special criteria. I use the same weight and grip on all surfaces. I also play with the same tension which is 25 kg normally. There are some exceptions – when I play at altitude, then I could have them strung at 25½ kg.’ 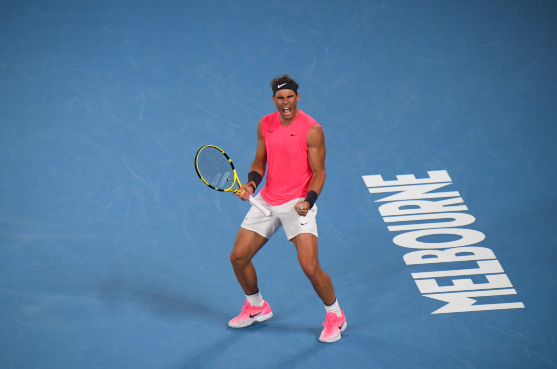 His association with Babolat goes back to when he was nine. While Nadal started with the Pure Drive, he helped develop the Pure Aero and remains involved in Babolat’s product testing and innovation process. He likes the equipment for several reasons – it works perfectly for the heavy topspin with which he plays, and the power generated is exceptional. Nadal has ‘a big interaction’ with the Babolat team as they work together on the tool which is the most important part of a player’s equipment kit.

So could he still play and be competitive with a racquet he used in 2005, the year he won his first French Open? He is amused with the question. ‘No, no, no, I don’t think I could play with the same racquet,’ he says. ‘The racquets have evolved, and I am sure I would be missing something, and the result wouldn’t be the same.’

That ties in with the assessment of Babolat’s president and chief executive Eric Babolat, who has shepherded the company’s journey with Nadal. ‘The aerodynamics of the Pure Aero are completely different to those of a traditional racquet,’ he says. ‘Traditional racquets were made with the preparation for a stroke to be made horizontally, but the Pure Aero has evolved to allow for an almost vertical preparation to generate the topspin.’

The close-knit family enterprise that Babolat is fits perfectly with the close-knit family operation that has been the bedrock of Rafael Nadal’s career. It was once suggested that racquet companies would line up to throw big bucks at him to use their equipment, but money is not a factor in this case. ‘The fact that it is a family business is something gets me closer to them,’ he says. ‘It’s the fifth generation so that says something as well.’

And in case you were wondering, he has never broken a racquet in anger, the answer is no. ‘It’s the way I was taught,’ he says proudly. ‘Even when I was a kid, I never threw my racquet.’