Equipment preparation, an expertise synonymous with a dialogue with the champions

The relationship between a brand and the players on its team is essential. Thanks to its expertise, today, Babolat can rely on three star players, representing three generations: Rafael Nadal, Dominic Thiem and Felix Auger Aliassime. When it comes to preparing or developing their equipment, these three top players have a special relationship with the brand and its teams dedicated to sports marketing, research and development, and customization.

“Every year, there are product tests organized with the champions”

“Each time, the objective is to propose new solutions to help players be even more successful in their game, for their frames as well as their strings. We implemented this process recently with Dominic Thiem for the new Pure Strike model he’s using for the 2019 Roland-Garros tournament,” explains Sylvain Triquigneaux, Performance Lab Manager.

The goal of the tests is to gather as much information as possible, establish a dialogue with the player, and experiment on the court. For Rafael Nadal, the customization team is asked to prepare his racquets, adjusting the balance and weight throughout the season depending on the court surface and other parameters specific to his tactical choices. Everything is measured to the nearest gram; this level of preparation resembles the tuning of a formula 1 racecar.

“Tuning worthy of a formula 1 racecar”

Depending on where a player is in his career, he makes quite different choices for his equipment. Therefore, his equipment supplier accompanies him from the early stages of his career through his rise to the professional level. Felix Augier Aliassime is a great illustration of this. He is a young athlete still evolving; therefore, Babolat must offer him products that will evolve as he grows and also be adapted to the changes he will implement in his game, especially in terms of power, spin, and control.

Babolat’s expertise, and its ongoing relationship established through its Sports Marketing department, allows the brand to anticipate certain needs. As Jean-Christophe Verborg explains, the idea is to stay in tune, and to be attentive: “The players do not have much time. You have to know how to propose concrete and precise things that also consider the evolution of the game. The input can come from the brand, the player or his team, like his coach for example. “

“The example of RPM Blast with Rafael Nadal”

Even when open and receptive to changes and innovations, a good player always detects the slightest change to his weapon. But nothing is set in stone, and it is the brand’s role to open the door to new possibilities.

“I often give the example of the RPM Blast because it is symbolic. To go from a yellow to black string, to a softer string…we’re taking about how things feel; an area where the pros are very sensitive. In the first 5 – 10 minutes of the test, we saw in Rafa’s eyes that something was happening. I understood that he wanted to go further; to know more. We fine-tuned the development to quickly launch this string, which has become the standard on the global market,” concludes Jean-Christophe Verborg.

Conversing, sharing, testing and exchanging are essential in the relationship for a champion to evolve his equipment and be the best performer on the court. 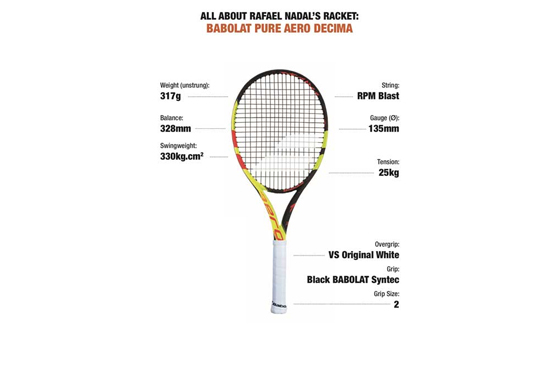