Fred Bertucat-Martinez is rare, if not unique – he has had the pleasure of trading shots with Pete Sampras on a tennis court, and with Juan Lebron, the world No 1 in padel, on a padel court.

The brief chance to hit with Sampras came when Fredwas working at the US Open for Babolat’s stringing team in 1997 and the world No 1’s regular hitting partner had yet to arrive for a practice session. He found facing Sampras across the net much more gruelling than playing padel many years later with Lebron.“Hitting with Pete Sampras I suffered 10 times more,” said Fred, who is now Babolat’s International Padel Development Director.

Fred thinks those two experiences demonstrate some key differences between tennis and padel. Much as he loves tennis, 51-year-old Fred thinks padel is easier to master and is better at bringing together players of different ages and abilities.

“The court is smaller and you make fewer mistakes because the ball can bounce off the walls,” he said. “Juan Lebron can hit some extraordinary shots, but I was able to be a more challenging practice partner for him than I could be for Pete Sampras.”

There is plenty else that Fred loves about padel, a sport he has worked in for more than 20 years. A Frenchman, he has been based since 2002 in Spain, where padel is more popular than tennis.

“When you learn to play tennis it will often take two years before you can play properly, but in padel it only takes six months,” he said. “It’s because the racquets and the courts are smaller and the game is not so fast. Precision is more important than power.” 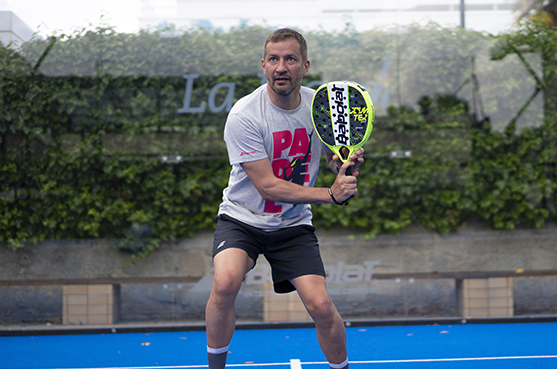 A court especially for children

Fred views padel as a perfect introduction to all racquet sports. When his own children first tried it, they immediately preferred padel to tennis.

“They liked the fact that the net was lower and the ball could bounce off the walls,” he said. “It was like playing tennis on a smaller court on a softer surface with the bonus that they weren’t continually having to go off and collect the balls, because they came back off the walls! They loved it.”

Most importantly, Fred sees padel as a sport that brings people together. “When you play tennis you’re about 20 metres away from your opponents,” he said. “You have to be very focused on your tennis. If you mishit the ball, it will fly off who knows where. You play but you don’t talk.

“Padel doesn’t require as much concentration. There are four of you on the court and you’re only four or five metres from each other. You talk between points and games – and you carry on talking afterwards at the bar.”

Fred’s passion for padel dates back to his first sight of the sport on a visit to the Sanchez-Casal Academy in Barcelona more than 20 years ago.

“I immediately had the impression that the players were having tremendous fun,” he recalled. “I saw more older people playing and really enjoying it – 60-year-olds who didn’t have to run so fast and so often. They had smiles on their faces.

“I thought to myself: ‘Something is happening here, this is a sport that can only grow,’ and since then I’ve concluded that padel is an excellent racquet sport for young and old. It’s good for youngsters because of the small court and slow game, and for older players because they don’t have to run so much but continue feeling young playing padel.”

Fred is proud of the way that Babolat has treated padel as a sport in its own right. For example, padel players always used to play in what were essentially tennis clay-court shoes, though padel’s playing surface is artificial grass on a base of sand.

After talking to Mondo, a company which makes padel playing surfaces, and to Michelin, Babolat introducedsoles that have a combination of chevrons, as used on clay-court tennis shoes, and tiny studs that arelike mini versions of what you find on football and rugby boots.

“Babolat’s history is rooted in tennis, but today there’s a recognition in the company that there are tennis players, padel players and badminton players,” he said. “In padel we have observed, we have listened and we have grown.”