‘Immediately for me it was fantastic’ – Kai Niederhuber

Had Herr Niederhuber not suffered a painful tennis injury, and had his eight-year-old son Kai not alighted upon an enticing orange racquet in the local sports shop, Austria might never have acquired one of the most promising badminton players it has ever had.

Klaus Niederhuber’s troublesome arm persuaded him to opt for the lighter, defter skills of the shuttlecock game, a compromise leading to Kai’s life-changing encounter with the showy racquet. It also revealed an ominous strength of will.

‘I still remember that first time I saw Kai,’ says Jürgen Koch, a former Austrian number one who owned the shop and is now one of the teenager’s advisers. ‘And how much he was pushing his father to buy the racquet!’

Kai recalls this too. ‘I really wanted my own racquet. And I told my father I really wanted that one,’ he said, still with a hint of firmness. And so the brightly coloured blade, a Babolat Satelite Brio, became his. It proved a good choice, for the lad continued using it until making a big step forward when he was 13.

‘That was when he had his first contract,’ Koch said. ‘Now he is Babolat’s rising star.’ And still only 17 this September.

Badminton was love at first sight for Kai Niederhuber. ‘Immediately for me it was fantastic,’ he says. ‘It was the skill I really liked.’ There was enough of that in him to be competing in tournaments within six months.

First it was local tournaments in Upper Austria. Soon he started to travel. Last season he won important matches in the Austrian Bundesliga, and in 2020 he captured all three under 17 titles at the Austrian national championships.

‘Kai has potential to reach the world’s best,’ Koch believes. ‘There is never a guarantee of that, but because of his technical skills and attitude, he has a chance.’

As well as that sharp eye, Kai displayed an open mind and an ability to visualize how to break new ground – qualities perhaps appropriate in someone from Ansfelden, the birthplace of Anton Bruckner, a composer who defined new ideas in classical music.

It was Kai’s tennis-playing dad who had shown him how to hit the shuttle, and afterwards there were several coaches, notably Peter Zauner, a former Austrian national champion, who Kai says ‘inspired me to keep working.’ 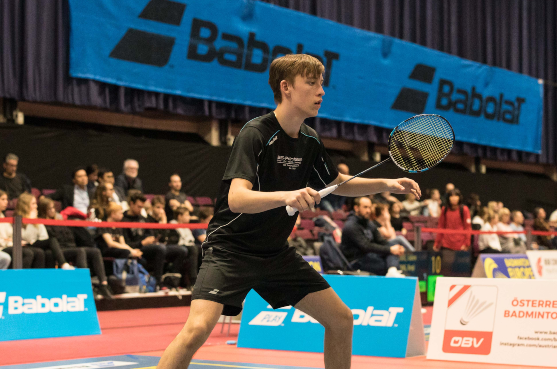 His schedule can be very demanding. Kai goes to a Handelschule, a special school teaching the business side of various sports, and both before and after lessons he trains at a nearby Olympic centre. This means there is badminton before school each morning, and more again after school. Sometimes it’s four or five hours of badminton each day.

It is perhaps unsurprising therefore that strain can take a toll. ‘A year ago I had problems with my mental game and actually quit in one match,’ Kai admits. ‘I lost focus and couldn’t go on playing. But now I’ve improved my mental skills. If I’m angry I just say, “keep on going, never mind, keep on going”.’

Why, as a singles specialist, does he sometimes enter two doubles events as well, requiring him to follow three disciplines in some tournaments? It is another learning device, says Koch. ‘Doubles can help your net play, your overhead game and speed. There are more decisive moments in doubles than in singles. Service and return are really important. It can be important for tactics and mentality too.’

Last year Kai grew to 180 centimetres (5 ft. 11 in.) while still only 16, which made it harder to move fluidly, but it created an advantage for an attacking player with exciting, well-developed jump smashes.

Now when Kai Niederhuber leaps and his racquet flashes, it’s no longer the childhood orange of the Babolat Satelite Brio that captures the eye. It’s the silver and blue flashes on his black-framed Satelite Essential racquets.

Silver can symbolize hi-tech, wealth, or something precious. Blue is sometimes called the sublime color. And Kai Niederhuber has shown that he can wield the weapons of sublime achievement.